Living her Legacy — The Jerusalem Post by Judah Kalman

Barbara Greenspan Shaiman has made it her life’s work to share her message of hope through humanity learned from the incomparable inhumanity of the Holocaust. 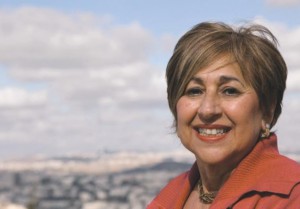 Barbara Greenspan Shaiman was born into a perfect storm of tragedy few could comprehend, let alone process healthily.However, that is not what sets her apart from the millions of other men and women in the world who were born into equally tragic and inauspicious beginnings. What sets Shaiman apart is not where she came from, but where she ended up: An honorable and compassionate destination, achieved by harnessing the profound pain and tragedy she was born into to find a higher calling.

Shaiman, the child of Holocaust survivors, has used her family’s catastrophic legacy to transform her pain into meaning, to get herself – and as many people as possible – to a better, more humane destination.It is this inexhaustible focus to find meaning in a past devoid of humanity that has distinguished Shaiman, of Bala Cynwyd, Pennsylvania, in her pursuit of practicing tikun olam (healing the world).Through her organizations Champions of Caring and Embrace Your Legacy – and her book Live Your Legacy Now!: Ten Simple Steps to Find Your Passion and Change the World – Shaiman has made it her life’s work to share her message of hope through humanity by encouraging adults of all ages and backgrounds to learn from the past and create a better future. “My goal is to empower individuals to become socially responsible leaders and actively engaged citizens to ensure that what happened to my family, the other six million Jews and five million other victims, never happens again,” says Shaiman.

FOUR YEARS prior to Shaiman’s birth in Regensburg, Germany, in 1948, her parents, Henek Greenspan and Carola Iserowski, both emaciated and afflicted with typhus, met at a convalescent center in Theresienstadt outside Prague after their liberation from the living nightmares that had decimated both of their families. Shortly after surviving a series of death marches and incarceration in death camps, including Auschwitz, Birkenau, Stutthof and Theresienstadt, Iserowski learned she was the only survivor of a Polish family that once numbered close to 70. Greenspan, who received a degree of shelter from Oskar Schindler at his Krakow factory (but did not make his famous “list”), also lost the majority of his family to Nazi barbarity. Despite having barely enough strength to function, and suffering enough trauma to incapacitate the most resilient of souls, the two met and fell in love. According to Shaiman, Greenspan approached Iserowski at the center one day after being struck by her beauty. Although robbed of her once beautiful brown locks of hair and weighing no more than 80 pounds, he told her that if she would allow him to, he would gladly take her dancing. Iserowski, in return, replied that if she could find a dress, she would join him. And so began the joining of two broken souls who would desperately try to rebuild their lives.

A FEW years after they emigrated from Germany to New York City, when Shaiman was four years old, Iserowski changed her daughter’s name from Bella to Barbara. Shaiman says her mother wanted her to have an “American” name so that she would not be viewed as a “greenhorn immigrant,” and would fit better in her new country. However, until her recent death, her mother called her Bella. Penniless, unable to speak English and living in difficult conditions in the Washington Heights section of Manhattan, Shaiman’s father initially found work at a pickle factory in Newark, while her mother gained employment crocheting for a local tailor. Greenspan, who years later went on to earn a successful living in textiles, worked hard to make enough money to send Shaiman and her younger brother to yeshivas and Jewish summer camps to ensure their identity as Jews were firmly rooted. Shaiman went on to attend Hunter College in New York City, marry at the age of 19, raise two children while earning a master’s degree in counseling and education and live throughout the northeastern US, where she began her career as a teacher and later became a successful businesswoman.

IN THE early 1990s, newly divorced after 25 years of marriage, with her children now adults, Shaiman, who had created a highly profitable executive recruitment business, visited Auschwitz and Poland with her family and 100 Holocaust survivors. It was on this trip that she realized she needed to dedicate her life to a higher purpose. “I had an epiphany to create an organization that would inspire young people to stand up and speak out against injustice and become advocates for social change,” she says. Shortly after a chance meeting with and encouragement from Steven Spielberg in 1995, Shaiman created Champions of Caring, a not-for-profit organization dedicated to educating and empowering young people to take active roles in improving their communities. Shaiman utilized the organization – which has since impacted over 10,000 atrisk youths in the greater Philadelphia area – to become social activists by conveying her message and vision of a more humane and compassionate world, based on the tragedy that befell her family as well as genocides that continue to this day. The curriculum Shaiman devised for Champions of Caring reflects the lessons of the Holocaust and has become a prototype to foster constructive social change. Its principles are widely recognized as a model for reducing prejudice and violence, promoting youth leadership and service and helping teachers and administrators in their efforts to create cultures of caring in schools and communities. Since its inception 17 years ago, youths from diverse socioeconomic, ethnic, and religious backgrounds have gone on to identify and address issues such as autism, hunger, homelessness, teen pregnancy, child soldiering in Uganda, land mines in Afghanistan and cyber-bullying, among many others, to improve their local or global communities. In 2007, based on its success in the US, Shaiman expanded Champions of Caring to South Africa.

SHAIMAN’S FAMILY legacy, coupled with her experiences as a teacher and entrepreneur and her success with Champions of Caring, inspired her to in 2010 create her latest enterprise, Embrace Your Legacy and pen Live Your Legacy Now! In her book, she shares her life experiences and the powerful lessons she learned as the daughter of Holocaust survivors. “It’s critical to make ‘living your legacy’ an inter-generational and family affair. It’s not just about passing on money, but rather passing on your values. That’s what’s key,” says Shaiman of her new endeavor’s mission. “You live your legacy by identifying your core values and what you stand for – by finding your humanity and living a life of purpose.” Both Embrace Your Legacy and her book serve as vehicles for Shaiman to continue her mission to make the world a more humane place, one person at a time. Through speeches, workshops and consulting, she shares her transferable 10-step approach to provide participants with the tools necessary to create social change in an informed and creative manner. With workshops tailored for corporations and public and private high school classrooms, to university seminars, faithbased programs and community women’s and men’s groups, Shaiman has presented her message to audiences of all ages and backgrounds – locally, nationally and internationally. “My goal is to encourage organizational cultures to promote caring and compassion,” she says. “History has shown us that we can do many things to overcome the apathy that allows terrible things to happen to our fellow human beings by working together.”

A COMPELLING public speaker, Shaiman has received numerous awards for her work, including the US Department of Housing and Urban Development Best Practices Award, the National Association of Women Business Owners’ Women Making History Award, State Farm Insurance’s Service-Learning Practitioner Award, the Archdiocese of Philadelphia’s Servant of God Award, the Association of Jewish Holocaust Survivors Mordechai Anielewicz Award and the Daily Points of Light Award. She has also been inducted into the Hunter College Hall of Fame and named a “Community Quarterback” by the NFL’s Philadelphia Eagles and Parade Magazine. “We can change our lives in ways we may never imagined, and inspire others to do the same. And by enriching someone else’s life you enrich your own,” she says. She has also co-founded a Holocaust consortium of educators in Philadelphia, chaired the women’s division of the Jewish Federation of the Berkshires and chaired the Holocaust Memorial Committee of the Greater Philadelphia Jewish Community Relations Council. When not working on Embrace Your Legacy initiatives, Shaiman says she most enjoys spending time with her five grandchildren. “They remind me every day of the importance of tikun olam and why I do what I do,” she says. In terms of encouraging others who may feel overwhelmed by the prospect of affecting meaningful social change within their own communities, she makes it clear that anyone with enough motivation and vision can indeed make the world a better place. “You don’t have to be rich or famous to live and share a legacy. We can all embrace, enjoy and live our legacies and fill our days with challenge and purpose by sharing what we have learned from our past with others,” she says. “My hope is to inspire people to create a vision of what their life and world can be and have them live and flaunt their humanity.”

Learn more about Barbara Greenspan Shaiman’s organization, Embrace Your Legacy and Champions of Caring, at www.embraceyourlegacynow.com and www.championsofcaring.org.